The science of interacting surfaces

Few areas of the bicycle would function with any desired degree of efficiency without the use of optimised formulas. Lubricant is a silent and often invisible aid to performance and protection. The complexity of a bicycle chain’s tribology cannot be overstated. Constant motion and the simultaneous occurrence of numerous and often contradictory factors – a fixed pin inside a moving roller, for example make it an absorbing field of interest. Tribology’s purpose in reducing friction and wear delivers benefits from enhanced mechanical efficiency to anti-corrosion. It has been overlooked for too long and this chapter attempts to correct that oversight. 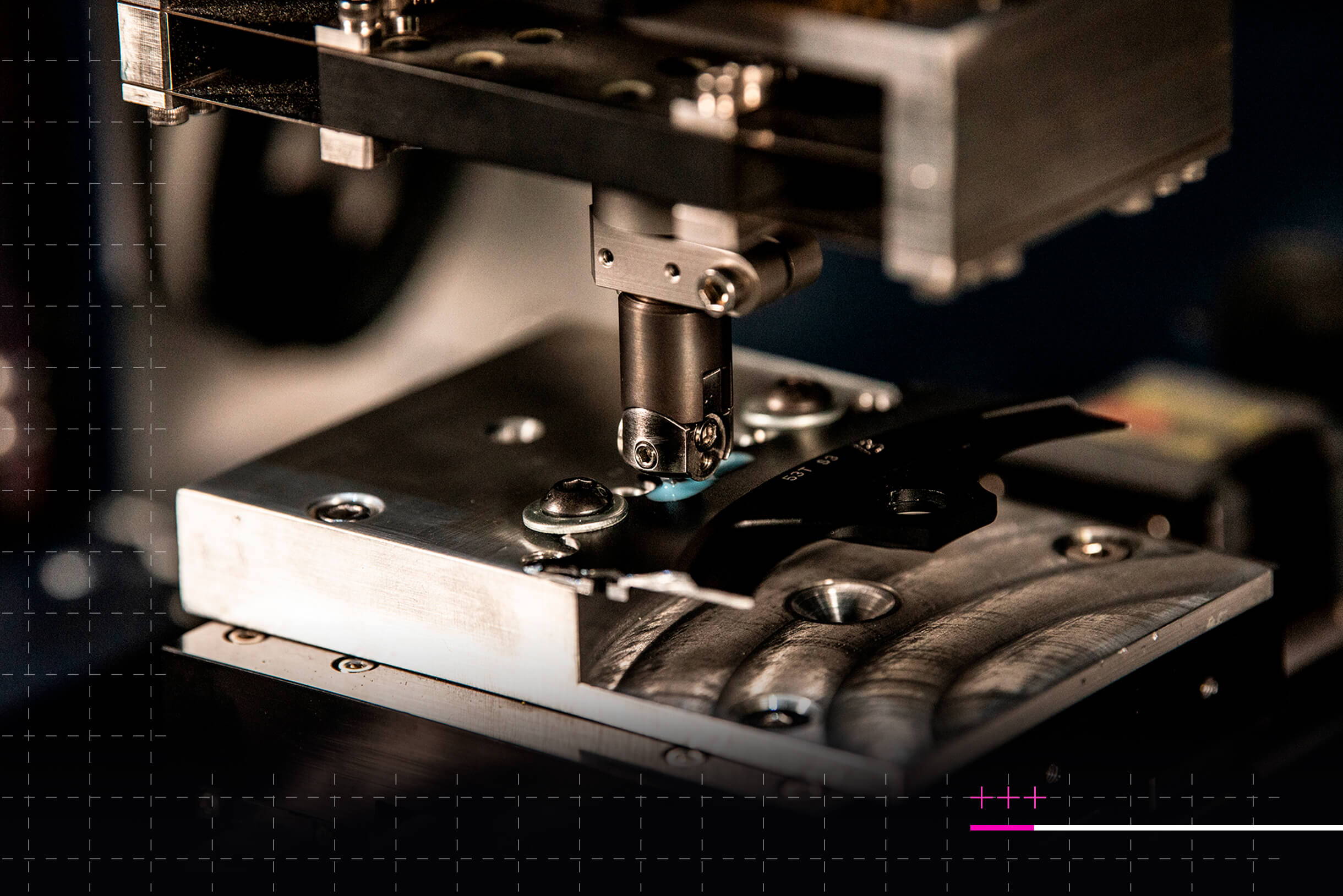 The complexity of a bicycle chain dictates that a formula must be optimised for performance or durability. The tribologist’s first consideration when creating a lubricant to enhance durability is reducing the speed at which wear – an unfortunate inevitable consequence of contact – takes place. This goal is different from optimising a lubricant for performance, where the goal is to reduce friction.

Wear can be reduced by lubricants that establish a tribofilm. A tribofilm is generally used to refer to a layer of protection between two mating surfaces; in this case, between elements of the drivetrain that are just nanometres thick. On a micro level, the replenishment of a formula whose components break down to create a tribofilm is automatic and intrinsic. The phenomenon, which relies upon a process of molecular formation and reformation, depletion and replenishment, is described as chemical kinetics.

Lubricants can also be optimised for durability by use of chemical compounds with high molecular weight. Polymers and other ‘long chain’ components form a dense layer that separates drivetrain components by mere microns and this reduces contact and wear. The presence of the organic friction modifier in the contact provides microscopic separation of the rubbing counterparts thus preventing/reducing direct contact, which ultimately reduces wear.

A performance lubricant’s primary purpose is to reduce friction. The tribologist’s ultimate goal is to minimise the force required from the rider to overcome the resistance that comes with rolling a chain over drive rings and sprockets. Our experts have a range of chemical tools to help in this task, which we’ll describe in detail in the next chapter. Here, where our focus is on tribology, we’ll provide an outline of the most popular types and the way in which they work.

Nanoparticles reduce friction too. Some, like graphene, use layered, structured particles to create a shear plane. Others ‘roll’ during the process of tribological contact and reduce friction intrinsically, such as PTFE or metal oxide particles. Viscosity is another performance concern addressed in the formula. Thicker lubricants offer higher performance by their ability to resist dust particles and other microscopic debris, but viscosity should be carefully adjusted as very viscous lubes can have the negative effect of increasing viscosity due to viscous drag.

Chemistry is only one aspect of a performance lubricant, however. The tribological conditions described in the earlier section on durability – speed, load, direction, tension and more – are equally applicable. Drivetrain materials are important too.

A lubricant’s effectiveness depends heavily on the surface chemistry of the steel from which the chain is made. Some compositions offer a high degree of absorption. Others like ceramics, do not. Similarly, the finish applied to the chain by the manufacturer is a key determinant of contact pressures.

Accurate testing demands that, where possible, the components which the development lube is applied to replicate those used in the real world in every aspect. We test with Shimano and SRAM drivetrain components and with non-standard finishes too. Anodising, for example, has a profound effect on lubricant absorption. Muc-Off works with external partners to create test materials of the highest accuracy.

Tribologists regard friction and wear as separate phenomena. Different additives are added to the lubricant to improve either friction or wear performance. In some cases, the same additive can be used to improve both properties. 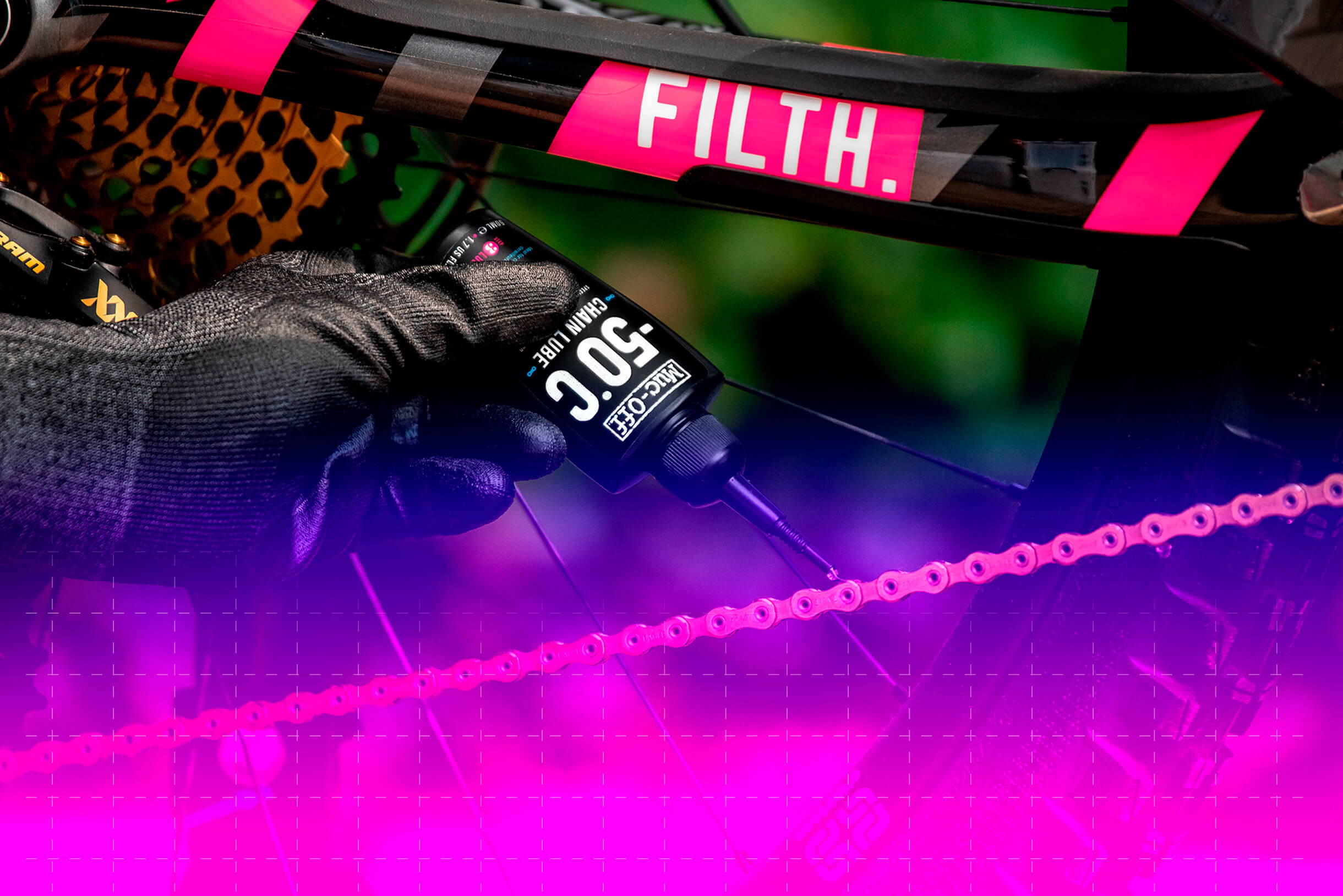 Protecting a bicycle chain from corrosion is also a matter of tribology. Once a metal component, particularly the steel links of a bicycle chain, becomes so worn by friction that it’s stripped of a coating or its native oxide layer, its unprotected (“nascent”) surface becomes very reactive and so vulnerable to oxidation – also known as rust.

Lubricants developed for this purpose utilise corrosion inhibitors; additives that contain molecules which prevent the generation of electrons and delay the electrolytic process which creates rust. Muc-Off uses corrosion inhibitors in a range of products, including sprays and lubricants.

Extreme temperatures (or pressures, in tribological terms) present a different challenge. Most lubricants are produced in liquid form and can be subject to crystallisation or evaporation. Polyalphaolefin (PAO) molecules are very resistant to high temperatures. Some of Muc-Off’s new products use esters which are resistant to freezing above -20° and experience minimal waxing which reverse as temperatures increase. 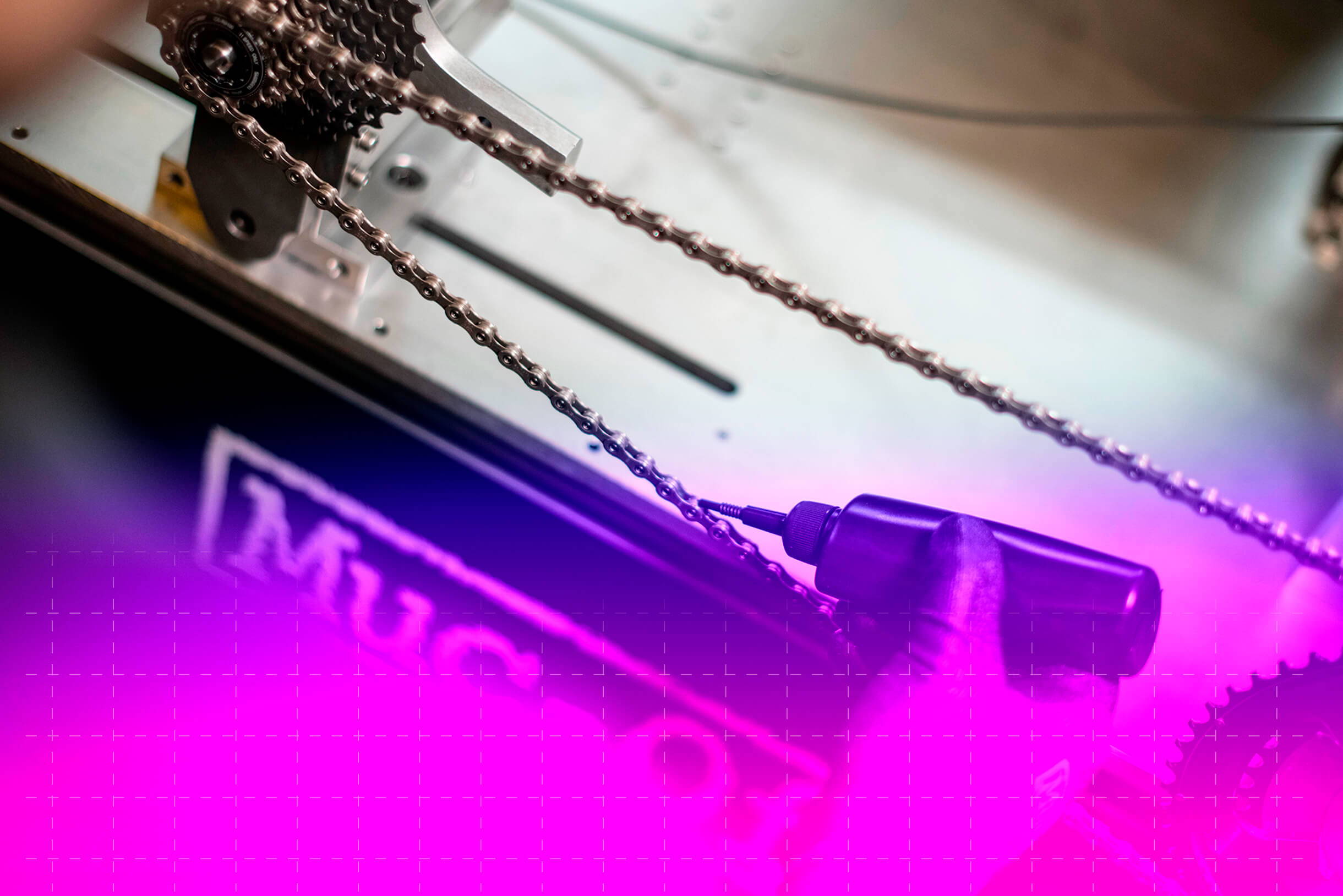 Chemistry and tribology: an equal relationship

The co-dependence of chemistry and tribology lies at the heart of our drive to bring all aspects of bicycle lubricant development in-house. From highly sophisticated equipment to engineers of the highest calibre, we have backed this strategic aim with action and investment.

Where bold claims for lubricant performance rest on pseudo-scientific testing – conducted with a turbo trainer, for example – the loss of credibility risks damaging the category. All market participants share a responsibility to move forwards from myth and anecdote. Placing the same emphasis on testing (tribology) as the product (chemistry) is essential to gaining the credibility the sector needs.

As a result of Muc-Off’s incredible work within tribology, the brand started to attract attention outside of the bicycle industry.

Muc-Off employed its tribology expertise and equipment in assisting Renault F1 with a unique and unusual problem. At the time Muc-Off had recently taken delivery of over a quarter of a million pounds of new tribology and white light interferometry equipment, allowing the flexibility of this cutting-edge system to utilised in this very demanding project. While the project did not lead to any specific outcomes, Muc-Off were honoured to be in the conversation of such a prestigious and technically advanced sport, once again showing how their equipment and expertise was breaking new boundaries.

< PART ONE: INTRODUCTION
PART THREE: CHEMISTRY >
BACK TO PERFORMANCE HUB