Muc-Off has always worked with partners of the highest sporting and technical capability. An internal culture driven by scientific development has supported partnerships with world-class organisations as varied as the Laboratory of the Government Chemist and Canyon//SRAM, or with the National Physical Laboratory and Team INEOS-Grenadiers and Team Bahrain-McLaren. 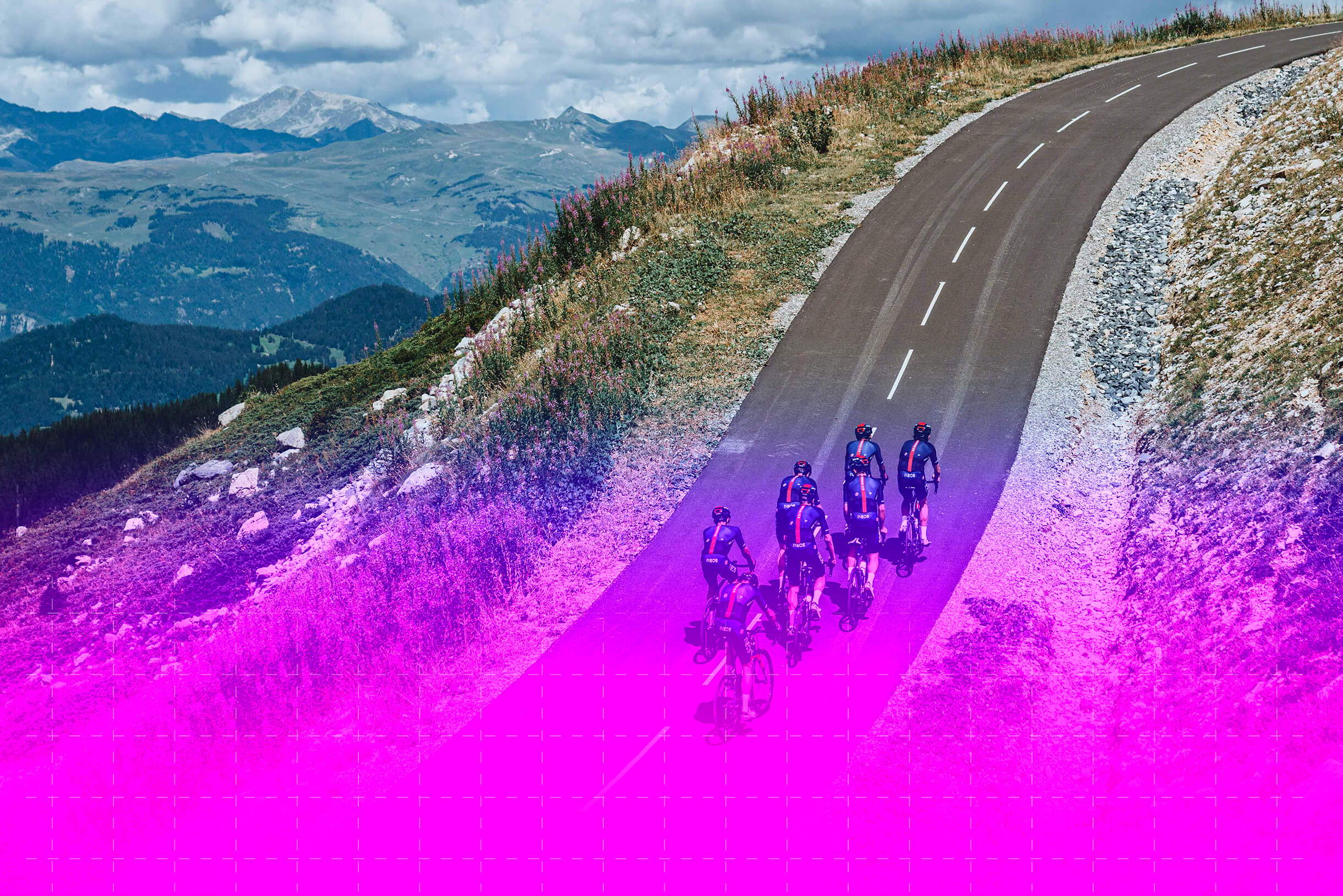 Our partnership with Team Sky/INEOS Grenadiers has in many ways set the standard for any new relationships with organisations or teams. It all started in 2014 and has delivered seven Grand Tour victories along with several of our most popular products. A shared commitment to evidence-based development underpins our most successful partnership.

Muc-Off’s partnership with Britain’s only UCI WorldTour squad, formerly known as Team Sky, has been instrumental to our embrace of good science in preference to the marketing spin that dominates the sector. Carsten Jeppesen, the team’s Head of Technical and Commercial, has a personal distaste for exaggerated claims. From his first meeting with Alex Trimnell, Muc-Off’s founder and Managing Director, he sensed the same desire for evidence-led development.

"Since partnering with Muc-Off we have enjoyed seven very successful years together marked by wins on the road and an ever-growing range of innovative products. They share our ethos of continuous improvement, and this latest launch is a great example of this and working collaboratively. The partnership is an excellent case study, not only for how we operate as a team, but also for how they operate as a company” 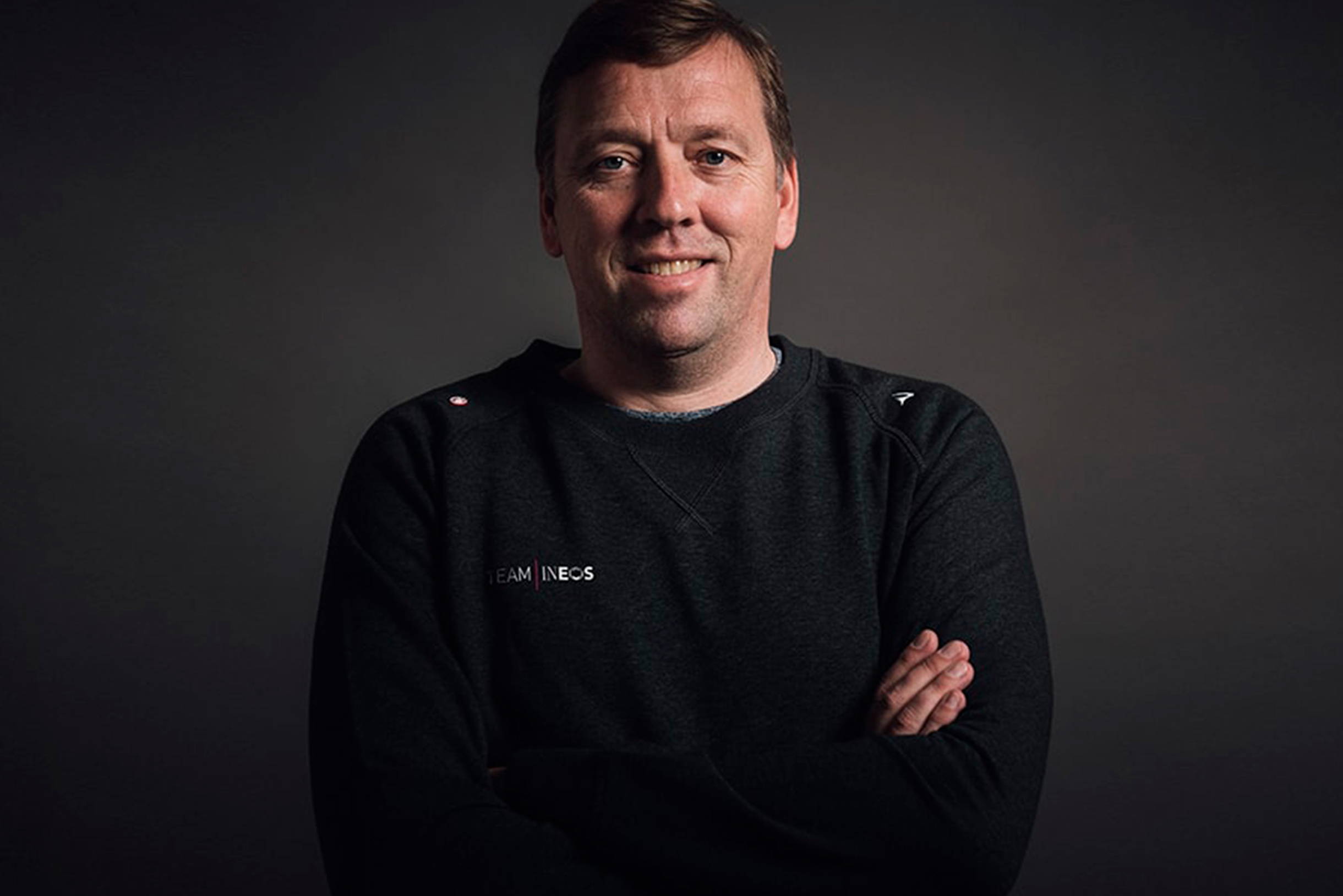 Mechanic Jeff Crombie spends most of his time at the Team INEOS-Grenadiers service course in Belgium. The facility embodies the standards of a team focussed on excellence in every area: sporting, commercial, logistical and mechanical. It is a calm, purposeful environment, kept spotlessly clean and filled with sophisticated machinery. To this extent, it offers a striking parallel with Muc-Off’s new laboratory.

"Muc-Off are super open to feedback. I’ve always found them unbelievably helpful. You can’t ask more from a sponsor than that they’re willing to listen. For example, they’ve been working on a slight modification to the Hydrodynamic Lube. They send us tests and samples and invite us to offer feedback.” 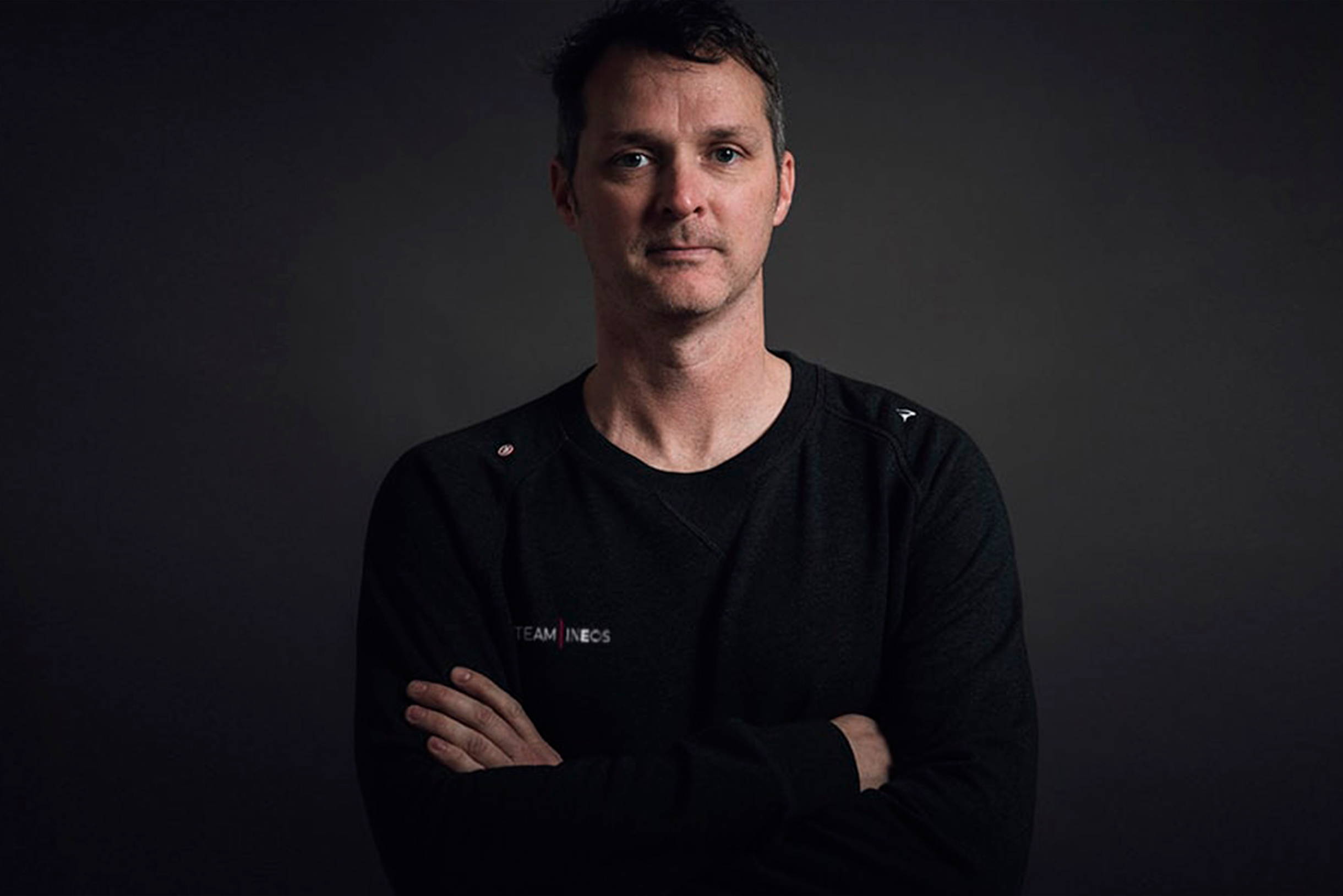 Christian Knees is the elder statesman of Team INEOS-Grenadiers. At 39, he is some 20 years older than the team’s youngest rider, the 19-year-old Spaniard Carlos Rodrigues. Knees is an invaluable resource for Muc-Off: a rider able to draw upon 15 years of competition at the sport’s highest level to provide essential feedback to our scientists and engineers. His obsession with detail is not just confined to race day. Knees ensures his fleet of training bikes, everything from an identical machine to his race bike to mountain and gravel-specific machinery, are maintained to the highest standard. He relies upon the generous supply of Muc-Off products to his home near Cologne where the rewards of traffic-free farm roads are counter-balanced with the penalty of mud and grime. 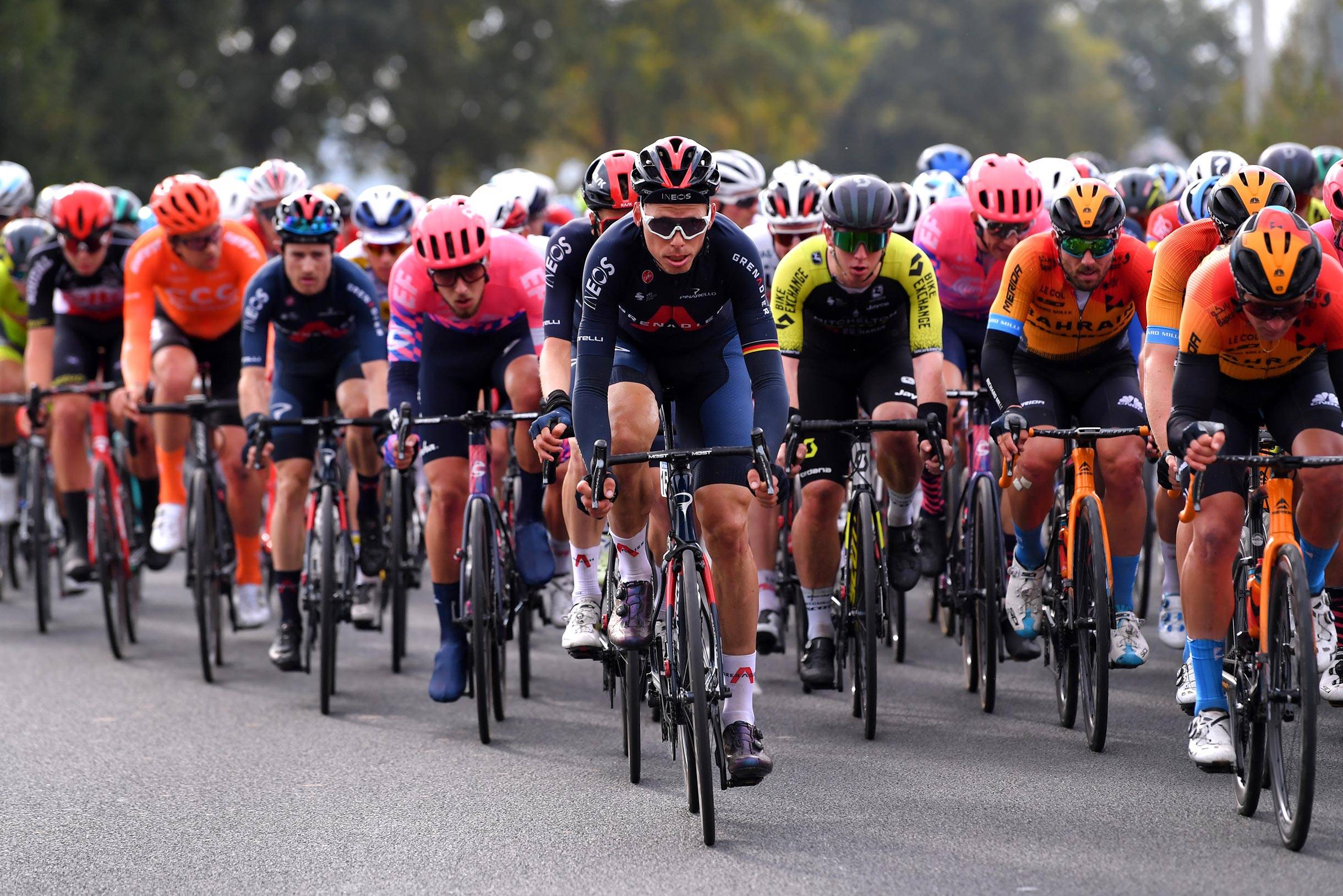 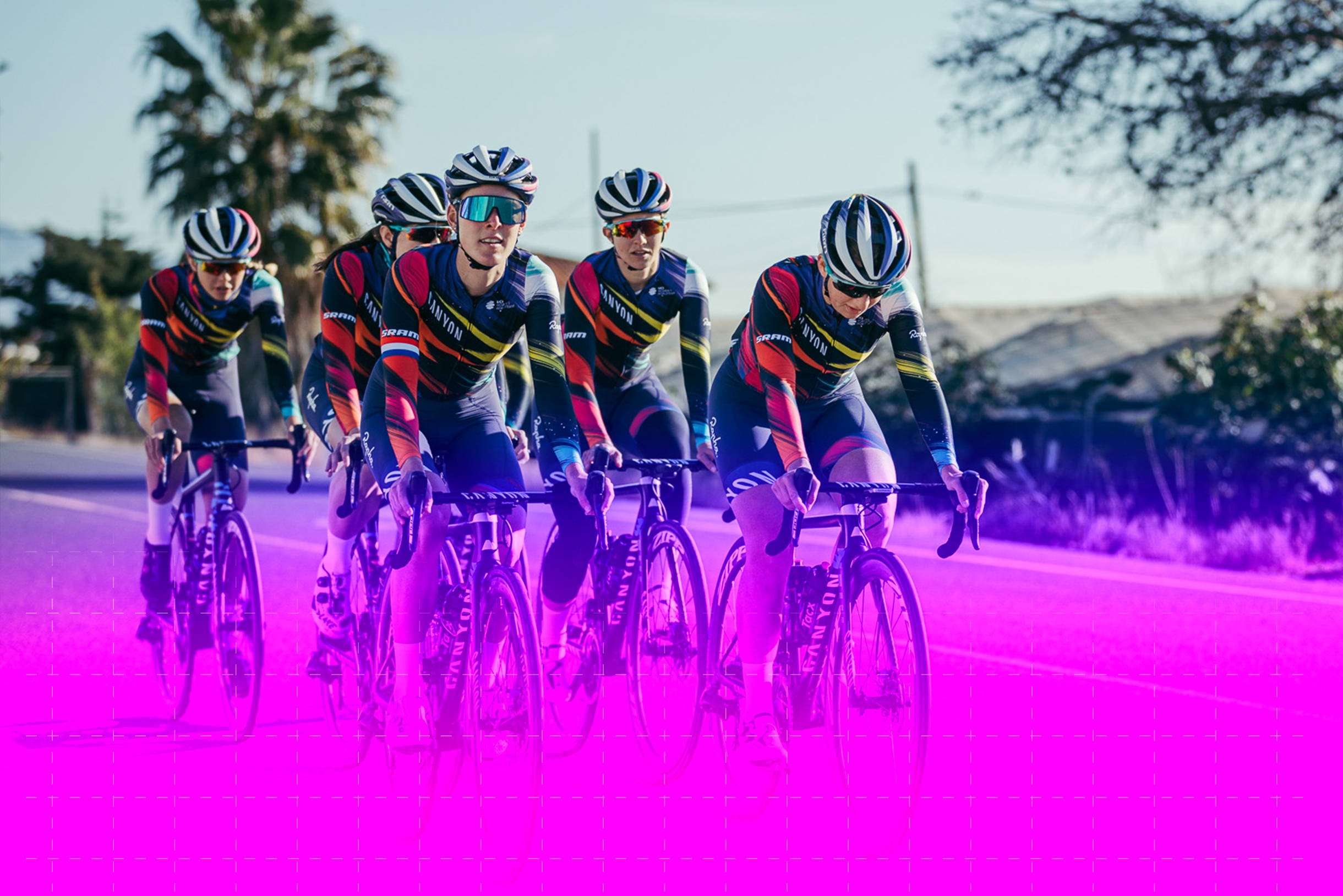 Canyon//SRAM, the UCI Women's WorldTour team, serves as an intriguing case study for the value Muc-Off gains from its technical partnerships. It is a world-class outfit led by former world champion Pauline Ferrand-Prévot and Kasia Niewiadoma, a stage race specialist with overall victory at five of the most prestigious multi-day events.

Rolf Aldag joined Canyon//SRAM in January 2020 as a sports director. His long experience as technical advisor to numerous teams in the men's WorldTour makes him an especially valuable appointment for the team's partners. His first-hand knowledge of a rider's requirements (he raced for 15 years in the top tier of men’s professional cycling, before turning to management) allows him to translate rider comments into vital feedback. Aldag's precise and accurate descriptions of a product's performance are of immense value.

“You want to minimise risk. You do that by using the best products you can get and by working with people you trust. The product has to work in every situation. For example, it has to work for a rider in training whose home bike won't enjoy the same maintenance regime as the race bikes and spare bikes prepared by Chief Mechanic Jochen Lamade and his team. If you're in the team car as a sports director, you don't want doubt in any situation. You don't want to be in a wet race, for example, wondering if the riders' chains will need re-lubricating because the rain has washed off the first application. Muc-Off is a great partner. I have a relationship with them from my time with Team Dimension Data and know the emphasis they place on scientific testing and results. For me, it's all about proof. Until you have proof, it's just a story." 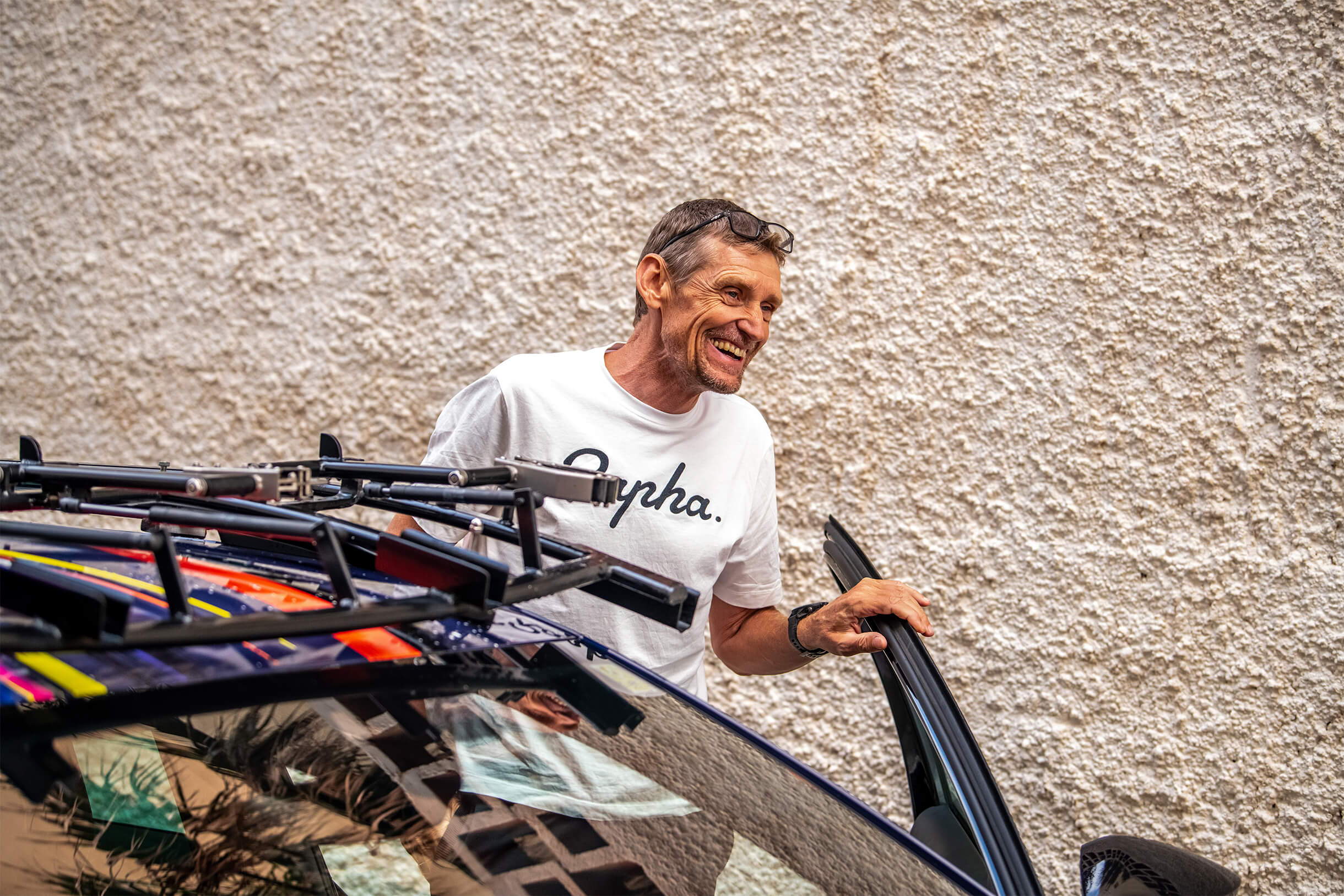 Jochen Lamade has worked in professional cycling for 15 years. His expertise is logistical and managerial, as well as mechanical: in addition to the team's vast supply of equipment, he is responsible for two full-time mechanics.

“We have 16 riders. Each rider has three road bikes: one at home for training and first and second race bikes. The race bikes stay at the service course. The girls have another two bikes – a time-trial bike for racing and a time-trial bike for training – so, in total, five bikes each. Some girls even have six bikes, so I have to maintain an overview of about 80 bikes."

He believes narrowing performance gaps among riders in the female peloton is increasing the significance of mechanical optimisation. Muc-Off's Nanotube lubricant is Lamade's choice when the riders race the clock. For the demanding conditions of the Spring Classics, he uses Muc-Off Hydrodynamic Lube and Muc-Off Hydrodynamic Classics Lube.

"Now that the women's sport has reached a really high level, every second counts. The function of the bike, and especially the function of the drivetrain, is becoming more and more important. The differences between the riders are tiny, so everything that you can achieve with better lubrication can make a difference. The time differences between first and second place are getting smaller and smaller all the time." 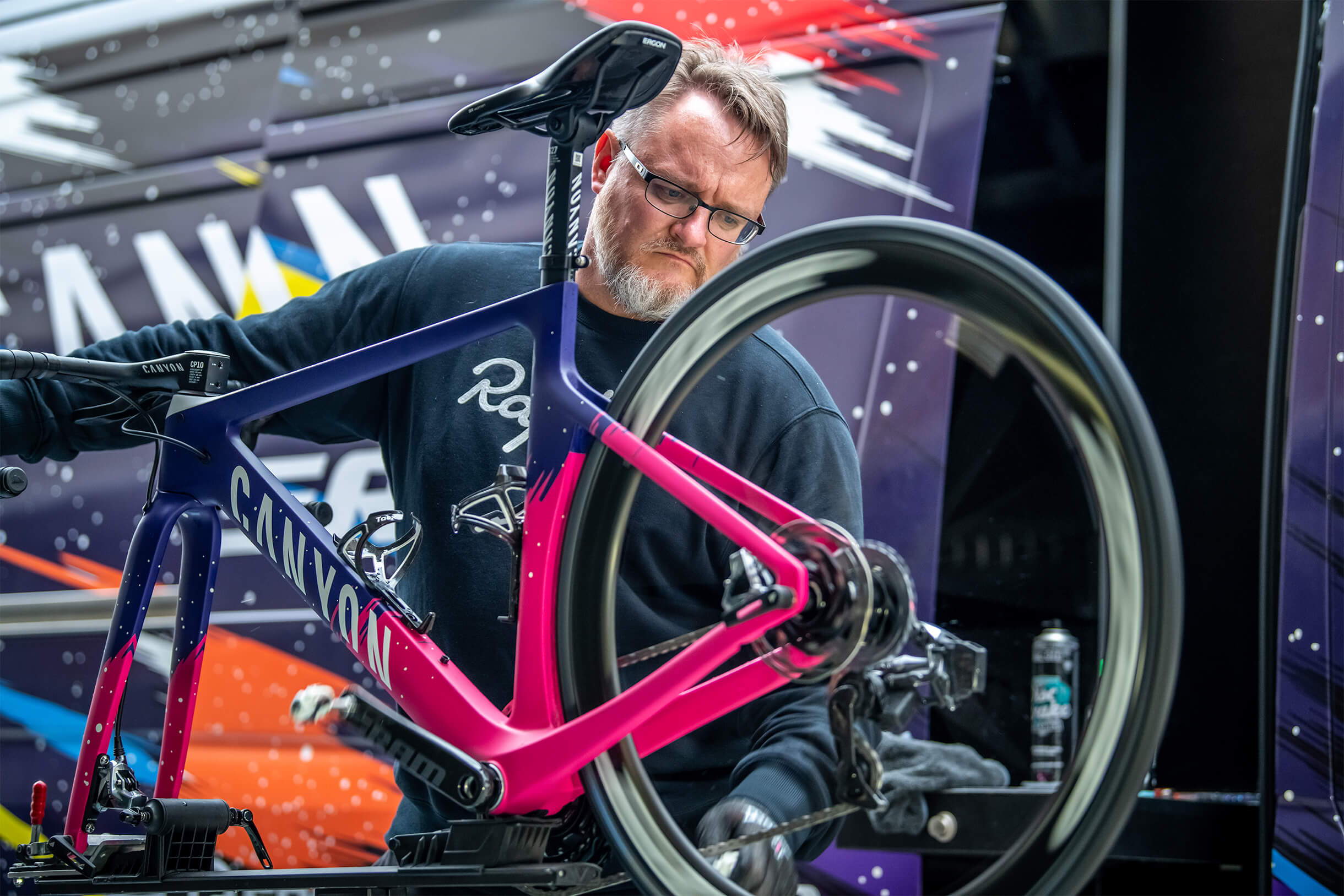 Alice Barnes is fulfilling the seemingly limitless potential that marked her arrival on the world stage. She has grown increasingly aware of the importance of optimum mechanical efficiency.

"I'm becoming pickier with my bike set-up. A few years ago, I would have jumped on any bike and ridden it and not really noticed if too much had changed, but I'm spending many more hours on my bike now. Because my race bike and training bike are set up exactly the same when something does change, I'm like: 'Oh, that's a bit strange."

Barnes’ development as a time-trialist has been exponential. She insists that she doesn't consider herself a specialist against the watch. Her British title and a share in the world team time-trial title won by Canyon//SRAM in 2018 suggest more than a passing acquaintance with cycling's race of truth, however. More recently, she has discovered that indoor racing brings similar demands for optimal drivetrain performance.

"Efficiency was one of the biggest concerns in the Zwift racing we did during lockdown. Obviously, making sure that every watt passes through the pedals to your avatar is very important. Tactics play a part online, but not as much as in road racing. We were told by the team before each race to have a clean, well-lubricated drivetrain to avoid losing any of that efficiency."

More specifically, Alice is aware of the synergy that exists between Muc-Off and her team. Canyon//SRAM stands for more than winning bike races, and its proactively inclusive stance is one shared by Muc-Off.

"Muc-Off and Canyon//SRAM are very similar. We're a bright team – colourful, exciting and inclusive – and Muc-Off is the same. It's a bright brand with exciting products. It's a really nice fit, and it's great to work with a company like that." 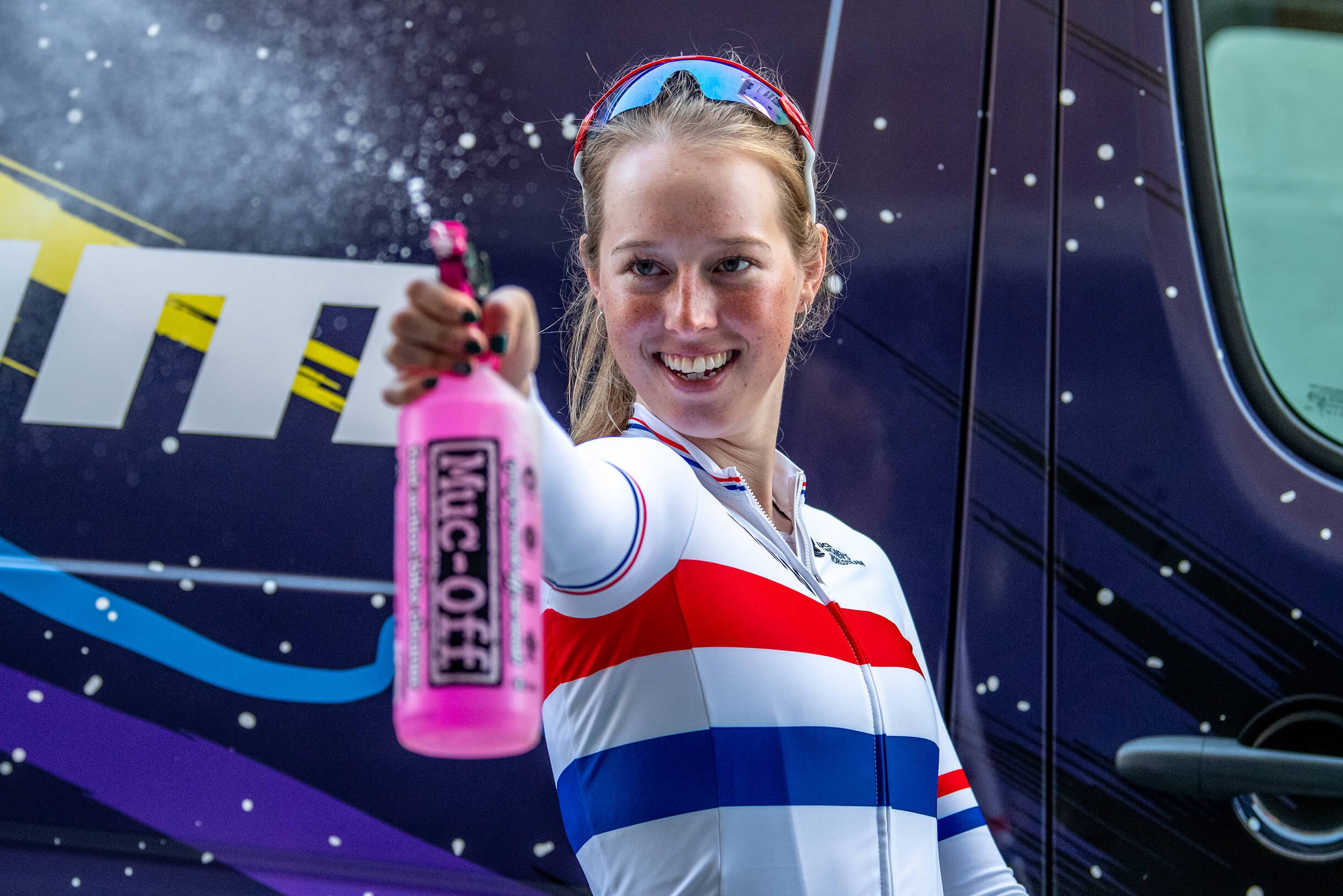 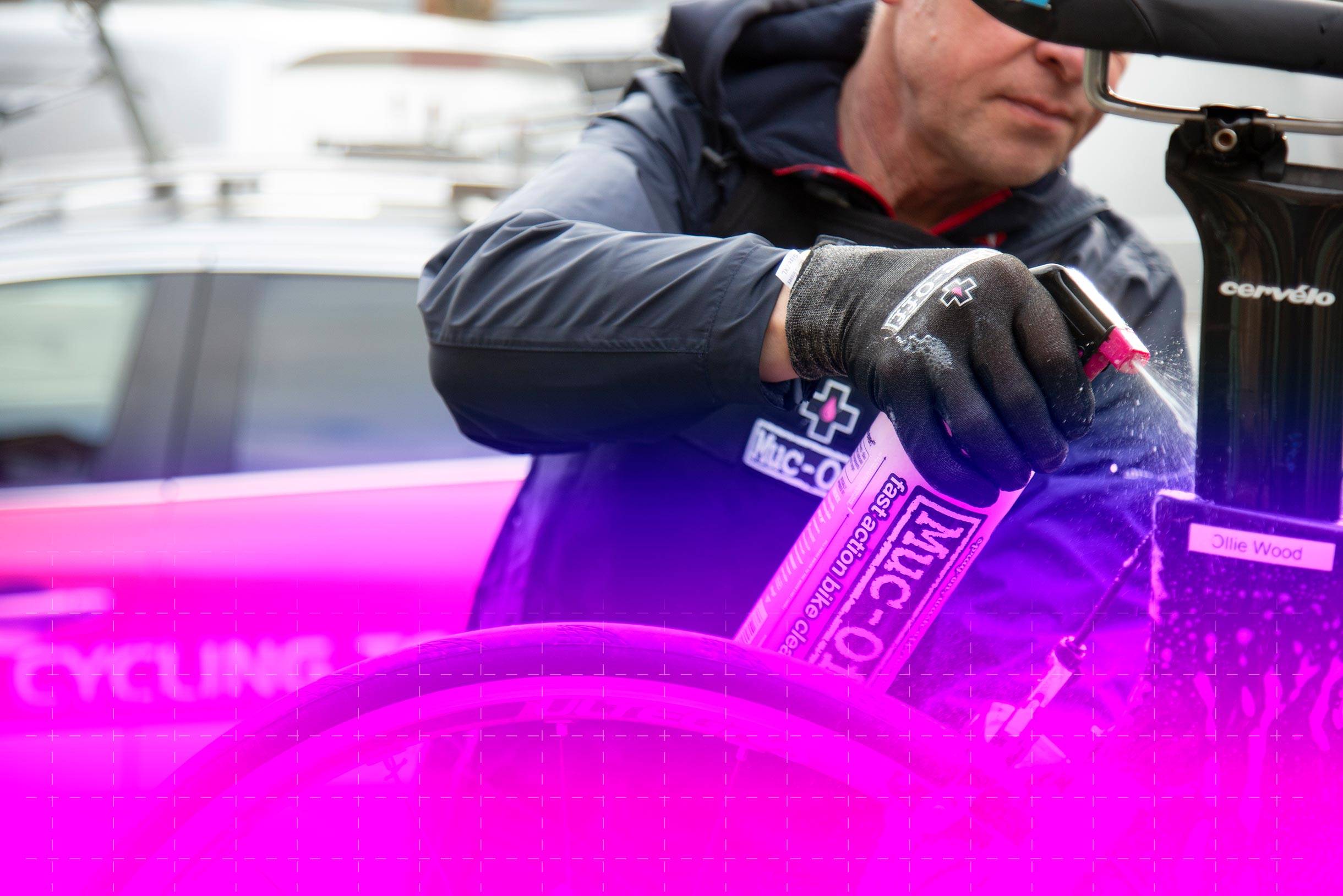 British Cycling is one of the world’s leading national governing bodies, harnessing mass participation from international success. The organisation oversees all forms of cycling in Britain, from BMX to mountain bike to cycle speedway. Whether you’re a personal challenge rider, a commuter or a leisurely weekend rider, they are committed to helping everyone enjoy cycling.

Darren is the Commercial Director at British Cycling’s and is responsible for the development and execution of the British Cycling commercial strategy, including managing commercial partnerships, developing their membership programme and maximising opportunities from major cycling events.

“2021 sees us taking our partnership one step further, by becoming the Official Tribology, Lube and Chain Optimisation Supplier to British Cycling and the Great Britain Cycling Team. The partnership sees us supporting across every discipline. From entry-level cyclists to elite Olympic and Paralympic contenders with their two-wheeled journeys. Muc-Off’s research and development team have been working closely with the Great Britain Cycling Team in the run-up to the Olympics, Paralympics, and UCI World Championships to help maintain and increase the team’s world-class performance. This is another demonstration of Muc-Off’s commitment to putting our technology and innovation to the test, on the world’s biggest stages.” 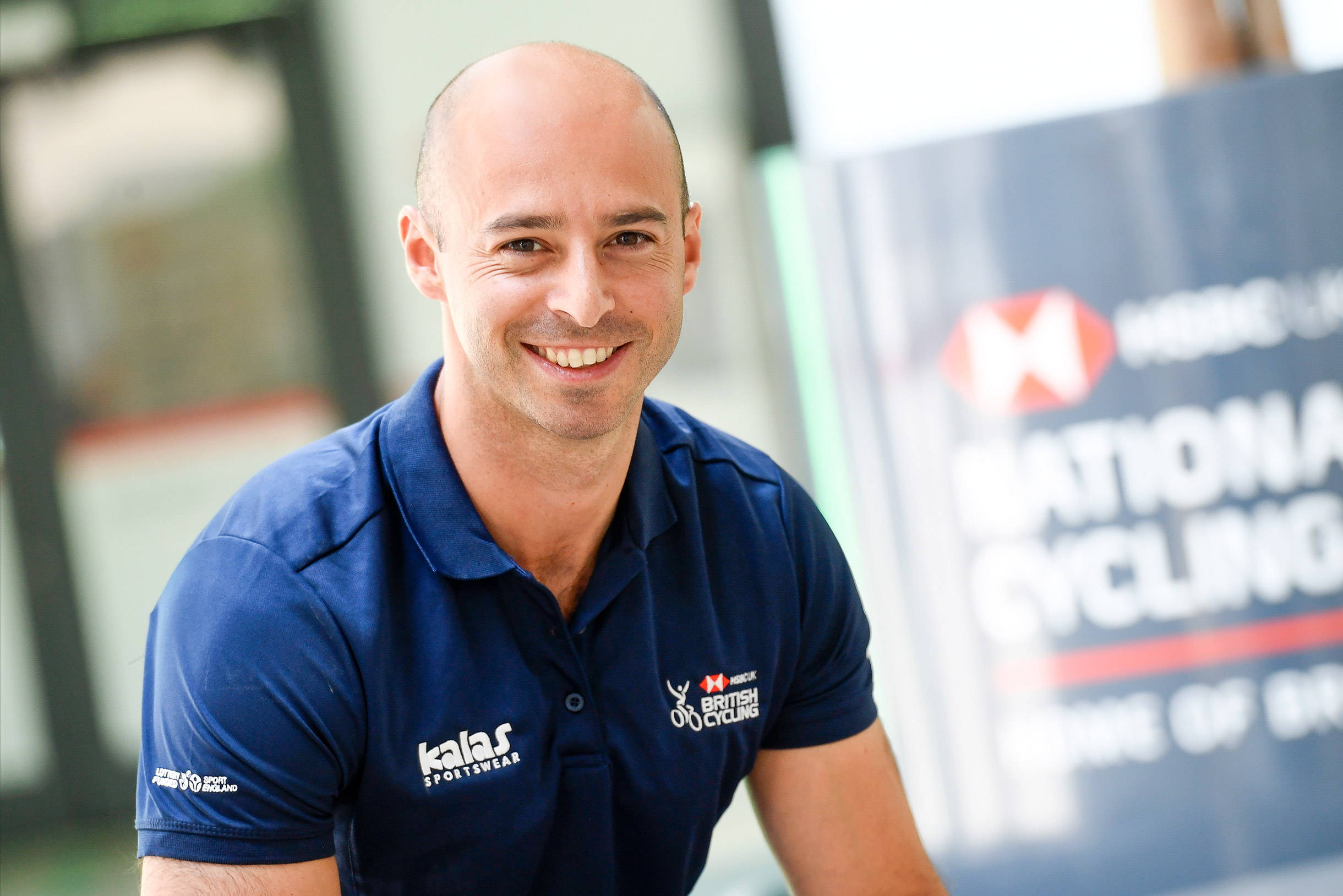 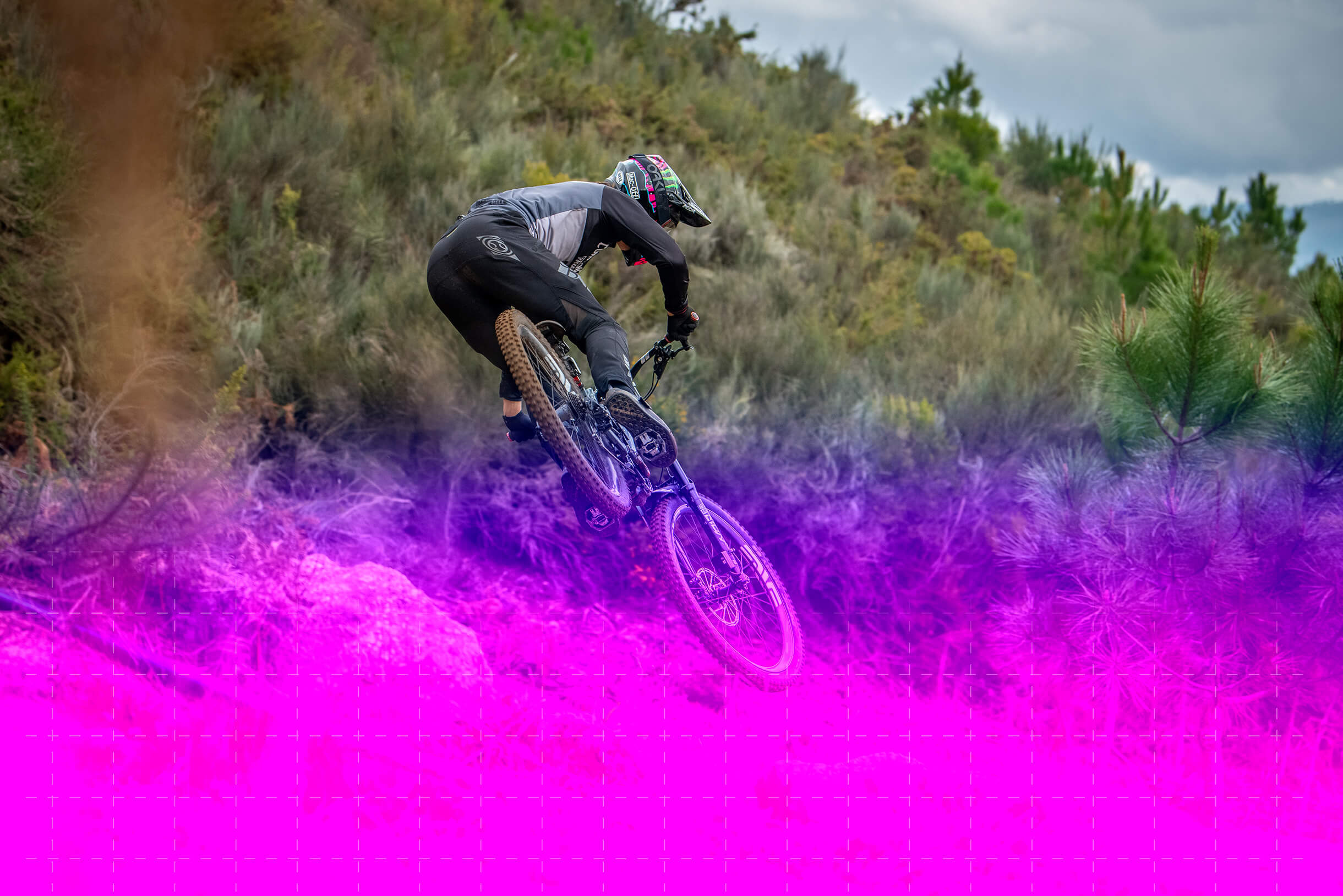 With mountain biking being Muc-Off's heartland, it's safe to say that we're big supporters of the sport. We're headline sponsors of Muc-Off Commencal – one of the top teams in UCI Downhill, with riders such as Amaury Pierron and Myriam Nicole. Then there's Canyon Factory racing, where we support both their enduro and downhill teams, who are always towards the sharp end of their respective disciplines. We also work with a variety of freeride mountain bikers like Matt Jones, Reed Boggs and Hannes Klausner – meaning we're covered across every aspect of off-road cycling. This variety of riders and teams gives us the perfect platform for testing any new products in some of the toughest conditions by the best riders in the world.